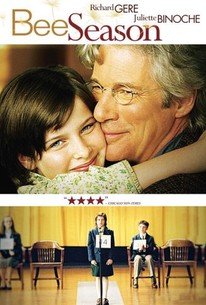 Critics Consensus: Bee Season is an intelligent, but frustratingly distant and diffuse drama about family dysfunction.

Critics Consensus: Bee Season is an intelligent, but frustratingly distant and diffuse drama about family dysfunction.

Critic Consensus: Bee Season is an intelligent, but frustratingly distant and diffuse drama about family dysfunction.

Adapted from the novel by Myla Goldberg, Bee Season tells the story of a family whose turmoil is brought to the surface by a young girl's unexpected talent. Eleven-year-old Eliza (Flora Cross) is the invisible element of her family unit -- her mother and father (played by Juliette Binoche and Richard Gere) are both consumed with work and busy avoiding their faltering marriage. Her brother, praised for musical genius, is wrapped up in his own adolescent life. Eliza ignites not only a spark that makes her visible but one that sets into motion a revolution in her family dynamic when she wins a spelling bee. Finding an emotional outlet in the power of words and in the spiritual mysticism that he sees at work in her unparalleled gift, Eliza's father pours all of his energy into helping his daughter become spelling bee champion, further distancing himself from his wife and son. A religious studies professor, he sees the opportunity as not only a distraction from his life but as an answer to his own crisis of faith. His vicarious path to God, real or imagined, leads to an obsession with Eliza's success and he begins teaching her secrets of the Kabbalah. Now preparing for the National Spelling Bee, and with her family spreading further and further into four separate directions, Eliza looks on as a new secret of her family's hidden turmoil seems to be revealed with each new word she spells.

Critical Consensus: "United 93" Is Best-Reviewed Drama of 2006
DGA & SAG Chime in with Their Nominations
Claire Danes in Talks to Join Richard Gere in "The Flock"

There's no shortage of material on the screen in Bee Season -- it's just not assembled in a satisfying manner.

Bee Season is earnest and heartfelt and respectful. And a botch.

Co-directors Scott McGehee and David Siegel, whose visual schemes lent a hypnotic aura to their previous collaborations ... don't find the right balance of story and image this time.

It's more thoughtfully conceived than most of what passes for filmmaking these days.

Those seeking transcendence here will surely be disappointed.

Perhaps the film's disparate subplots are given due attention in the book, but it all feels unfocused and jammed together here.

A well-told, enjoyable and insightful film, but its not necessarily as revelatory as its makers seem to think.

Something like a dream Madonna might've had while she nodded off during Spellbound...

Suffers from too many plots and not enough focus.

Imagine growing up in a family of academics, musicians, and Jewish mystics. When 12-year-old Eliza (Flora Cross) wins both the district and regional spelling bees, her father, Saul (Richard GereJewish mysticism, begins to tutor her daily. Not only is he preparing her for the state spelling bee competition, but Saul is also training his daughter to be the mystic he wasn't able to become. Bee Season is not only a movie about meditation, but it is also itself a meditation. This family is consumed with finding God, but they all look outside of the family to find it, and in the process, the family falls apart. Eliza's older brother Aaron (Max Minghella) is so jealous that his sister is getting all of the family's attention that he goes off and joins a Buddhist cult, and everyone in the family is so focused on their own problems that no one notices the mother (Juliette Binoche) going slowly insane! Bee Season is transcendent and thought-provoking, and it even makes me want to go out and look for God. 3 Stars 5-2-13

Family isn't just about talking. It's about understanding.

had a lot of potential but blew it.