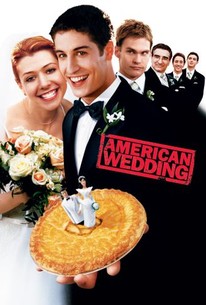 Critics Consensus: Raunchier and even more gross than the first two American Pies, American Wedding ought to please fans of the series.

Critics Consensus: Raunchier and even more gross than the first two American Pies, American Wedding ought to please fans of the series.

Critic Consensus: Raunchier and even more gross than the first two American Pies, American Wedding ought to please fans of the series.

Get on the guest list for this Unrated rite of passage. Jim (Jason Biggs) and Michelle (Alyson Hannigan) are saying "I do," and Stifler (Seann William Scott) is planning the bachelor party!

Frank Roessler
as Gay Bar Back
View All

Funny when it needs to be. I don't know what more you can ask from the third installment of a series that has gone further than anyone reasonably could have expected.

The formula has long since hardened into a flaky mess.

If there was ever a case of Hollywood's over-stroking a formula to squeeze every last drop out of it, American Wedding is it.

If you do not bring pride, good taste or sense to this third American Pie installment, you'll have a good time.

Dylan delivers a comedy just on the high side of exactly what's expected.

American Wedding, the hardly awaited sequel to American Pie I and II, picks up right where the others left off. Which is to say it starts at the bottom and works its way down from there.

The franchise's most expensive entry is also its most disappointing.

It's not as good as the first film, but it's a definite step up from the previous installment.

Another slice of American Pie. Older teens only.

The "American Pie" franchise throws in another kitchen sink of gross-out sight gags by screenwriter Adam Herz ("American Pie" 1 and 2) in this third, and hopefully final installment, of percolating testosterone commotion.

I've been had! People told me this didn't suck!

Michelle: Love isn't just a feeling. It's shaving your balls. "This time they're going all the way." Like every other American Pie film, American Wedding is just an average comedy. There's many laughs throughout, but I wouldn't call it a great comedy or even good comedy. It's average. There's nothing makes this movie anything more than just another raunch fest. The cast is serviceable as always, but other Stifler and Finch, none of these characters are anything to write home about.  Jim and Michelle have graduated from college and are now going to get married. All the normal, everything goes wrong gags are at work here. Nobody wants Stifler to be invited to the wedding, but he manages to find a way in. It doesn't help anything either, when Michelle's extremely hot, and virgin sister arrives. Stifler and Finch end up battling for her, while stuff keeps going wrong as the wedding approaches. There's really not too much to say about this movie. It's decent, but not something I thoroughly enjoyed. It has its moments and should satisfy fans of the previous two films. What made the movie watchable for me was Stifler acting like a good old boy in order to try to get his hands on Michelle's sister. In the end though, this was nothing special and just another addition to the American Pie franchise.

The best part of the American Pie films for me has been the relationship between lovable yet geeky horndog Jim and Michelle the band geek who proved she has quite a wild side. First they hooked up at prom, then, in part two they genuinely fell in love. In this, the third (and for a while, final) film in the series, the film takes the logical route to a story that started with maturation and virginity loss and concludes with Jim proposing marriage to Michelle. What follows, as you might expect, is a zany plot filled to the brim with gross out gags and crude sexual humor, as well as one bad thing after another happening, but all ends well, and, much like the first film, there's a good story here, as well as tons of heart, charm, and sweetness. Stiffler has never really been my favorite character, but he becomes quite the focus for a lot of the time. The way they handle his character though marks a big turn for him, and he really shows his true colors, even if it means Finch (my favorite) and Kevin take a back seat to helping Jim get through all his problems to come out on top. The film sees the departure of several significant characters in the series, absent in reality due to scheduling conflicts and difficulties with coming up with good plot lines for them all. It bugs me though, because there's no explanation given within the film for all of this. Things I liked about this film, aside from a logical story line that people care about, and a good mix of heart to go with the raunch, the casting of the great Fred Willard as Michelle's dad, made even more fun by the fact that he and Eugene Levy together can ham it up as the well meaning and caring, but sometimes embarrassing dads. Seeing Finch and Stiffler trade roles and behavior in order to fight over Michelle's hot little sister (a young January Jones) is good too. The use of two versions (due to licensing issues) of the great Van Morrison song "Into the Mystic" during the big climax is great too. Overall, the film is a lot of fun and wraps up a good trilogy nicely. It's not perfect, and despite his coming around, there's still too much Stiffler and not enough of Jim's 'real' friends, although, like I said, the way they handle the Stiffler subplot acts works nicely. Oh and of course, you have to throw in John Cho and Jennifer Coolidge for good measure. I enjoyed this film, and think you should give it a shot.

Though I don't like the Stifler character but this was better.