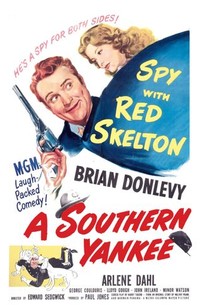 Hot on the heels of Columbia's The Fuller Brush Man, MGM released another Red Skelton gagfest, A Southern Yankee. Set during the Civil War, the film casts Skelton as bumbling bellboy Aubrey Filmore. Yearning to help the Northern cause by becoming an undercover spy, Aubrey succeeds beyond his wildest dreams when circumstances force him to pose as notorious Southern secret agent Major Drumman (George Coulouris), aka "The Grey Spider". Infiltrating rebel territory, our hero does his best (which is none too good) to intercept the Grey Spider's messages and smuggle them to the North. Along the way, he falls in love with pert Southern belle Sallyann Weatherby (Arlene Dahl). Many of the side-splitting gag routines were devised by Buster Keaton, notably the now-famous scene in which Aubrey gingerly walks across the battlefield between Northern and Southern lines carrying a two-sided flag -- the Northern Stars and Stripes on one side, the Southern Stars and Bars on the other -- a strategy that works until the wind suddenly changes! Though Edward Sedgwick is credited with the direction, Red Skelton later revealed that A Southern Yankee was actually directed by S. Sylvan Simon.

Paul Newlan
as Man with Saber

Critic Reviews for A Southern Yankee

There are no critic reviews yet for A Southern Yankee. Keep checking Rotten Tomatoes for updates!

Audience Reviews for A Southern Yankee

There are no featured audience reviews yet. Click the link below to see what others say about A Southern Yankee!