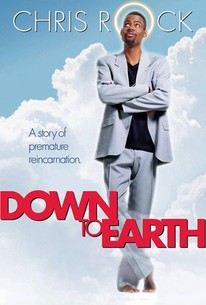 Critics Consensus: A toned down Chris Rock fails to bring a limp script to life as the movie moves from one gag to the next.

Critics Consensus: A toned down Chris Rock fails to bring a limp script to life as the movie moves from one gag to the next.

Critic Consensus: A toned down Chris Rock fails to bring a limp script to life as the movie moves from one gag to the next.

Down to Earth Photos

Comic Chris Rock co-scripted and stars in this remake of 1941's Here Comes Mr. Jordan, which was also remade with Warren Beatty in 1978 as Heaven Can Wait. Comedian Lance Barton (Rock) is struggling to get his career off the ground when he dies in an untimely bus accident; arriving at the Pearly Gates, he discovers that he's not supposed to have passed on for another 50 years. Barton is not happy with this turn of events, and eventually the Powers That Be send his spirit back to Earth, but for the time being he has to make do with the body of a middle-aged, closed-minded millionaire, Charles Wellington. Lance falls in love with a young community activist (Regina King), but he soon finds he has bigger problems at home: the millionaire's wife and her lover are both trying to kill him. The supporting cast includes Mark Addy as an actor passing himself off as an English manservant, Chazz Palminteri as Mr. King, Heaven's no-nonsense manager, and Eugene Levy as Mr. Keyes, the angel who accidentally ends Barton's life. ~ Mark Deming, Rovi

Robin Montague
as Woman in Balcony

Hollie Harper
as Woman in Balcony

Mary Burton
as Reporter Outside Hospital

Jernard Burks
as Man in Wheelchair

Roma Torre
as Herself

Dan Duran
as Reporter
View All

News & Interviews for Down to Earth

View All Down to Earth News

Critic Reviews for Down to Earth

The makers of Down to Earth were faced with a dilemma nobody would have anticipated: Boosting their star's screen time kills the comedy.

When Rock finds his authentic swing as an actor as well as a comedian, he'll be, like, a movie god.

Almost every minute of Down to Earth is entertaining. But not quite surprising.

A ham-handed fantasy that manages the damn near impossible feat of making Chris Rock unfunny.

Mr. Rock's opening scene is very funny. After that it's a steep downhill slide.

Likeable Chris Rock in a comedy about race.

Down to Earth is worth seeing. Like mainstream brew, it doesnt have high potency, but it is a nice diversion.

Down to Earth" follows the plot of "Heaven Can Wait" the way a robot follows its programming.

To put it bluntly: this is a bad movie.

"Down to Earth" crashes instead of alighting on angels' wings.

Audience Reviews for Down to Earth

WAY better than Heaven Can Wait, with much more humor.

Not a great movie.

Chris Rock's characher dies in an accident before his time. He comes back to earth as a white man.

Down to Earth Quotes