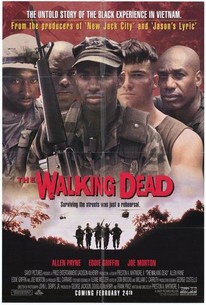 Using relatively unknown actors, first-time screenwriter-director Preston A. Whitmore II examines the effects of the Vietnam War on four black Marines sent on a doomed prisoner-of-war rescue mission. The four men are what's left of a platoon that's been decimated after landing behind enemy lines. In charge is Sergeant Barkley (Joe Morton), a no-nonsense, Bible-quoting preacher who is leading three privates to find a POW camp in an abandoned temple. Cole Evans (Allen Payne) is an intellectual who is highly political, racially proud, and a devoted family man. Joe Brooks (Vonte Sweet) is a cheerful, naïve, and brave young soldier. Hoover Branche (Eddie Griffin) is a dope-smoking, foul-mouthed rebel who hates the war and fights the sergeant constantly. They eventually are joined by a crazy, bloodthirsty white soldier, Pippins (Roger Floyd). Flashbacks reveal why each character joined the Marines. Pippins entered the recruiting office to escape rival gang members who were trying to kill him. Brooks enlisted to impress his girlfriend. Branche signed up after being fired from a meat-packing plant for stealing a ham that he used as admission to a party where he wanted to woo a girl. Evans enlisted because bigoted real estate agents prevented him from buying a decent home for his family in L.A. -- he intended to become a Marine officer so that he can get free housing. ~ Michael Betzold, Rovi

Critic Reviews for The Walking Dead

The zombie-horror-film title is the most dramatic feature of this meandering combat melodrama.

Paying tribute to the black American combat soldier, this is an earnest, socially conscious film that is neither effective as an actioner nor as a personal drama.

An admirable attempt, but these soldier's stories could be told a whole lot better.

There are no featured reviews for The Walking Dead at this time.