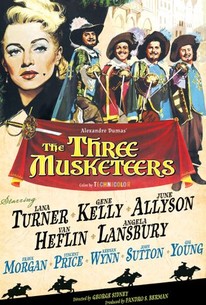 The third talkie version of Dumas' The Three Musketeers, this splashy MGM adaptation is also the first version in Technicolor. Gene Kelly romps his way through the role of D'Artagnan, the upstart cadet who joins veteran Musketeers Athos (Van Heflin), Porthos (Gig Young) and Aramis (Robert Coote) in their efforts to save their beloved Queen Anne (Angela Lansbury) from disgrace. They are aided in their efforts by the lovely and loyal Constance (June Allyson), while the villainy is in the capable hands of Milady De Winter (Lana Turner) and Richelieu (Vincent Price). Notice we don't say Cardinal Richelieu: anxious not to offend anyone, MGM removed the religious angle from the Cardinal's character. While early sound versions of Three Musketeers eliminated the deaths of Constance and Milady, this adaptation telescopes the novel's events to allow for these tragedies. True to form, MGM saw to it that Lana Turner, as Milady, was dressed to the nines and heavily bejeweled for her beheading sequence. Portions of the 1948 Three Musketeers, in black and white, showed up in the silent film-within-a-film in 1952's Singin' in the Rain, which of course also starred Gene Kelly. ~ Hal Erickson, Rovi

Ruth Robinson
as Mother of D'Artagnan

Kirk Alyn
as Friends of Aramis

John Holland
as Friends of Aramis

Critic Reviews for The Three Musketeers

A big cast, brilliant color and lots of action have been combined for entertaining results.

Conventional love stories, an odd sense of humor, double agents, honest people, and valid traitors are all featured in George Sidney's adaptation of this story. [Full Review in Spanish]

It might look good but it doesn't taste that good after a few bites.

...enjoyable corn in the 'Classics Illustrated' tradition. You can't believe a minute of it, but neither can you ignore its rollicking bygone Hollywood charms.

Audience Reviews for The Three Musketeers

"The Three Musketeers (1948)" is an extremely simple tale of a man (D'Artagnan) who comes as a peasant to seek war with the three musketeers who run the village. Athos, Porthos, and Aramis are in shock to believe that young D'Artagnan is able to take them on in dual, but he seems persistent enough to give him a chance. This film may have been original during the reading of the original novel/play, but this film is just a great representation, even if it is extremely cheesy, towards the origin story of the three musketeers. I must say that I thoroughly enjoyed this film, but through some action and romance sequences, it becomes a bit laughable and lazily written. It reminded me of early shakespeare at times, which I thoroughly admired for the risk that the director took. To conclude, I truly believe that they could have had a little more background of the characters instead of beginning with the journey of all four men from the start. This is an all around great film with cheese lurking around every corner!

Boy is this thing all over the place. Sumptous to be sure it has the MGM touch in spades as far as lavishness goes but an inconsistent tone and some terrible casting choices. The good-Vincent Price and Lana Turner are perfect in their roles with Lana looking astounishing in some beautiful and some ridiculous costumes. June Allyson also comes across well as Constance and Angela Lansbury looks great but is wasted as the queen. The average-Van Heflin, Gig Young and Richard Coote are merely adequate as the musketeers and while Frank Morgan is always a welcome sight he is just wrong as the king of France. The bad-Gene Kelly, and very bad he is, of course he handles the sword fighting episodes well with a dancers grace his over eager and downright dreadful line readings and reactions are painful and irritating to watch. Whenever he is on screen the movie stops dead in it's tracks. A very mixed bag.

It's true that all the Three Musketeer movies have the same story pretty much, but what makes them interesting is the actors, and this one has many good actors, who make the movie worth seeing.