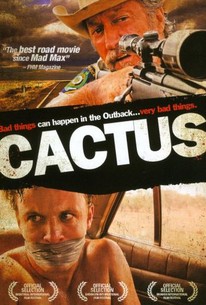 Two men on the wrong side of the law are brought together under perilous circumstances in this thriller from Australia, the first feature film for director Jasmine Yuen-Carrucan. Eli Jones (David Lyons) is a gambler whose luck has already taken a turn for the worse when he's attacked one night and wakes up the next morning bound and gagged in the back of a car. Behind the wheel is John Kelly (Travis McMahon), a man he's never met. Eli has no idea where he's going or why he's been abducted until John takes pity on him and removes the gag. As the two men talk, we learn that Eli is deep in debt to powerful men who have hired John to kidnap him. John isn't a criminal by nature, but a series of family crises have forced him to raise some quick cash, and he's agreed to bring Eli to a rendezvous in the outback in exchange for a big payday. While Eli has worked out what he's convinced is a foolproof plan, fate brings others into the picture and his scheme begins to unravel, with dangerous consequences. Actor Bryan Brown served as executive producer on Cactus as well as playing a key supporting role.

Cactus thrives on sparse dialogue and scant backstory, so the flood of information in the final act waters down what is otherwise a dark outback thriller.

Suspenseful misadventure gets off to a roaring start but doesn't deliver the goods.

The cinematography is terrific and one inspired scene involves the use of the Wiggles as an instrument of torture.

This laconic Australian thriller-cum-road movie wastes no time in getting into gear.

Jasmine Yuen-Carrucan ("Kill Bill," "Mongol") leapfrogs into the director's chair with confidence; but her flawed, lightweight script betrays inexperience behind a keyboard.

...Cactus feels like a short that's been awkwardly expanded to feature length.

Cactus is the sort of film that grabs your attention from the beginning and holds on tight almost throughout, but vanishes from your mind the minute it's over.

A lean and moody road-trip thriller, which though a little uneven, is nevertheless a deft piece of filmmaking.

This raw and ultra-basic film is more an exercise in building cinematic claustrophobia than servicing a traditional narrative.

Deeper and more complex than it appears at first sight, Cactus is a terrific low-budget Australian film with tough, macho themes that are supported by even tougher female elements

A lot of people talking about Australian cinematography are spending more time reading critics instead of watching movies! If I read the critics I would skip watching this film.... and I am glad I didn't. Interesting road movie by first time writer-director Jasmine Yuen-Carrucan. She was very good camera operator until this attempt as a director and now is showing us that is very capable woman doing both of those things very well. I like that this art work is not too commercial and I could describe it as esoteric. This film is NOT a masterpiece, but everything is done professionally without too much effort. I won't try to describe the plot, let me say that the journey of the two passengers is much more interesting than the destination.