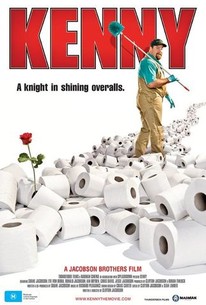 Critics Consensus: Kenny uses its seemingly lowbrow mockumentary premise as the foundation for a well-acted and surprisingly thoughtful character study.

Critics Consensus: Kenny uses its seemingly lowbrow mockumentary premise as the foundation for a well-acted and surprisingly thoughtful character study.

Critic Consensus: Kenny uses its seemingly lowbrow mockumentary premise as the foundation for a well-acted and surprisingly thoughtful character study.

Filmmaker Clayton Jacobson profiles one of the key cogs in society's massive machine with this mockumentary about a fearless Aussie plumber who has never encountered a drain he wasn't able to conquer. A combination of philosopher and comedian, Kenny (Shane Jacobson) has a heart the size of a septic tank. Though Kenny may hold one of the most thankless jobs in modern society, he never lets the dirty work get him down. Now, as Kenny juggles family tensions, leaking porta-johns, and the constant demands of fatherhood while preparing for the upcoming Pump and Cleaner Expo in Nashville, Tennessee, he and his loyal "Splashdown" crew are profiled by a documentary crew that isn't about to let some dirty overalls get in the way of a good story. ~ Jason Buchanan, Rovi

Critics Consensus: The Mummy Gets Embalmed

Few comic characters come with that degree of wit, let alone a philosophy.

It's a risky strategy, but one that pays off triumphantly here.

Funny enough to give scatology a good name.

Old-fashioned toilet humour gets a postmodern makeover in this laconic Australian mockumentary about a mobile toilet installer.

If you didn't know better you'd think Kenny wasn't an actor, so naturalistic is Shane's performance and so true to milieu is Clayton's camera work.

Much of the film is played for laughs, and giggles come easily when toilet humour is this available and, uniquely, appropriate.

Kenny is hilarious - toilet humour and all - and surprisingly touching. Just remember to wash your hands afterwards.

Charming comedy with a strong script and a delightful central performance from Shane Jacobson.

Kenny is the genuine article.

The result is a mockumentary that never mocks, but instead introduces us to a character we never stop rooting for and won't soon forget.

Kenny is always there in an instant with a philosophical quip and a stoic resolution.

I can only imagine if this film had been left in the hands of a lazy screenwriter trying to make a quick buck at the expense of characters and comedy. You can see Larry the Cable Guy being hired to play the titular role and the movie being completely crass and childish. This film takes a more believable story about this underdog and his, literally, shitty job and the pride he takes in what he does, even if it may "disgust" other people. It's a business that MUST exist because it's one of the only things we all have in common. But it's also a job that people treat with contempt, especially those involved with it as seen in the film. So it's a far more human approach to this type of story than most would've done, and I applaud that. Because it would've been really easy to make this movie all poop jokes with no heart and identity, but they chose to tell a good story with an immensely likable lead character and seeing how he deals with every day life doing the job he does. It's really easy to root for Kenny. The guy works hard and all he gets, figuratively and literally, is treated by shit. And yet, in spite of all that goes wrong for him, he still maintains a jovial attitude and that's an admirable trait. So it's very easy to get behind him. If there's a problem with the film is that, structurally, at least until he gets to Nashville, the film isn't put together well. You do get to see Kenny at various jobs and the troubles he gets into, but it's not until Nashville where the movie reveals any semblance of an actual story. There's the theme of underdog pride running throughout, but it's not implemented into the story until much later. I really liked this movie even if it isn't as funny as you'd think, but it is a charming little movie about a man who's just trying to do his best.. This is a well-written and well-acted movie, I don't really have much to say about this film, but I really liked it nonetheless.

Did anyone confirm whether or not this was a documentary or a drama? I think that it is a drama attempting to be documentary like but regardless, this is hilarious. Who knew that port a potties could be such a source of entertainment.

This is another movie that manages to be sweet despite its subject matter. I think it's all about tone. This is about a loo plumber and how he's treated by the world. It's strange to see how the guy's job colours (and doesn't) the rest of his personality. I guess the moral of this story is that every job that exists needs to be done, and no one is defined by what they do for a living.

The Australian's capture the spirit of 'The Office' in the unlikely guise of a loo attendant/plumber mockumentary with real heart. Kenny is disarming and full of wonderful aphorisms on life but it is his faltering relationship with his father and potential partner which had me rooting for him.