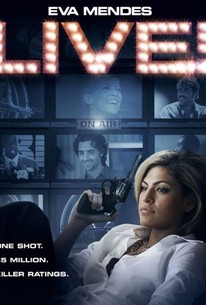 Critics Consensus: Uneven media satire on how far TV will go to secure ratings. Unfortunately it's neither as funny or as sharp as it hopes to be.

Critics Consensus: Uneven media satire on how far TV will go to secure ratings. Unfortunately it's neither as funny or as sharp as it hopes to be.

Critic Consensus: Uneven media satire on how far TV will go to secure ratings. Unfortunately it's neither as funny or as sharp as it hopes to be.

"Live!" follows ABN network president Katy Courbet and up-and-coming documentary filmmaker Rex as inspiration strikes to create the most daring reality program ever. The show is Russian Roulette, network style, with contestants competing for 5 million dollars on-air, complete with loaded guns. As seen through the lens of a documentary film crew, Live! examines the competitive and often gut-wrenching world of television production, where everyone from the crew to the contestants to the network brass becomes engulfed in a ratings battle to the top-a battle where questions of morality, ethics and sheer will lead to a darkly humorous and unforgettable outcome.

Robin Paul
as Dave
View All

There is a big problem in believing any of it, but a certain amount of fun watching television's more ghastly denizens wonder whether murder will improve the ratings. It does.

Triumphs, humiliation, barmy monologues and temper tantrums - reality television is scarcely in need of parodying. Certainly not from a preachy film like this.

Bill Guttentag's film is one of those shrill and cheery conspiracies on the wilder side of probability. But the black comedy has an infectious pace, and screwy logic.

It's hard to distinguish between the cynical indifference of the characters and the arrogant nihilism of the film itself.

Worth seeing for the slinky, snakelike, sexy and oddly vulnerable performance of Eva Mendes, a star-making role if I've ever seen one.

Mendes (best known as Will Smith's love interest in Hitch) is enjoyably poisonous, making Live! just about worth catching.

This crass, inauthentic mock-doc exposing the evils of reality shows and the venality of TV honchos manages both to bore and insult simultaneously.

However, in a world where reality show formats are beyond parody, this particular gun goes off half-cocked.

A sporadically entertaining but uneven media satire that never quite delivers on its clear sense of moral outrage.

Smart, incisive, but not as sharp as it should have been. With a subject this ripe for evisceration, it's a pity to let it off with flesh wounds.

This straight-faced satire of American television raises important issues and is engaging enough to keep us gripped. But the astute commentary peaks too early, then gives way to a finale that's messy in more ways than one.

Rich Cline
Shadows on the Wall
View All Critic Reviews (16)